Don’t Play In The Road

This is a closeup of a Blacktailed Rattlesnake, Crotalus molossus, from the Superstition mountains that had been clipped by a car. He had some problems with the mouth, as you can see in the photo, but may be ok.

I spend so much time looking for these guys that it’s amazing that people don’t see a bright yellow, 3.5′ animal as big around as a coke can laying in the middle of the road. I realize that quite often hitting a rattlesnake is the intentional act of the cowardly miniscule manhood crowd of the American Southwest, but sometimes it’s not. Birders are notorious for it … not that they mean to, but they’re looking UP and just miss whatever’s on the road. In the South East, there have been plenty of times I’m caught behind a binocular-faced duo in an economy car leaving writhing, dying reptiles in their wake. Just last May I found a nearly 7′ gophersnake crossing the road … just massive, brightly colored … impossible to miss. I stopped the car before they ran over it, and they said they were glad I did because they didn’t see it at all. Can’t blame them though … when I’m out looking for snakes I can’t say I’m looking in the trees.

Hope this guy is ok. 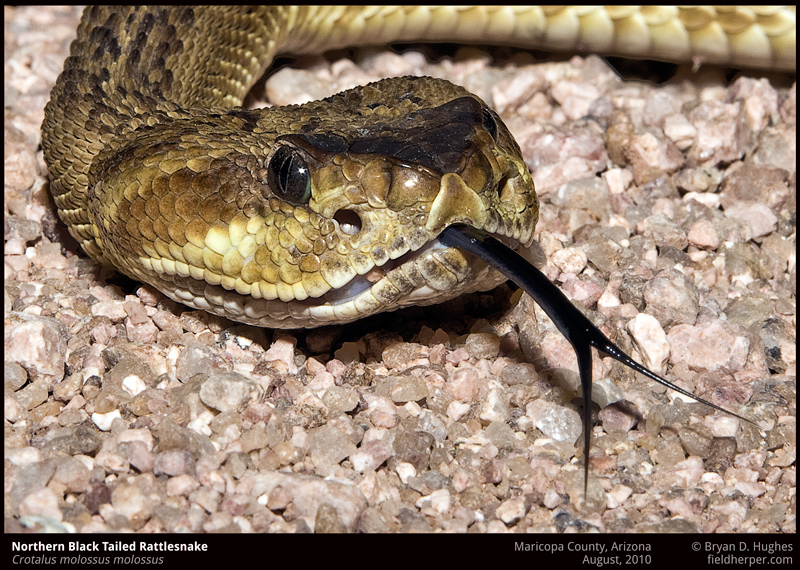 This entry was posted on Monday, March 21st, 2011 at 8:11 pm and is filed under Field Herping, Field Trips, Personal. You can follow any responses to this entry through the RSS 2.0 feed. You can leave a response, or trackback from your own site.

2 Responses to “Don’t Play In The Road”