Field notes and photography by Bryan D. Hughes
May
7th
2012

Heading to my target location a week ago, early in the morning, I came across a horse trailer parked crooked in the middle of the dirt road. From experience, this means one thing: there’s a rattlesnake in front of the truck. I met a cowboy there who was shooting a handgun into a pile of rocks only feet away. Not a physics major or decent shot, both the snake and redneck were unharmed when I jumped out of the truck to get the snake. I lied a bit and declared my self a ‘researcher’ and I need to take the snake with me. I had my relocation bucket handy so I threw it in there, and then heard some of the typical redneck lies that fly out of these fools’ mouths any time there’s an excuse to shoot at something. What a silly idea that is, what an optional encounter, to run up to a rattlesnake and create a dangerous situation where there previously was none. Did he believe the snake would jump through the air, crash through the windshield, and kill him from the side of the road? He must have, or he’s an idiot, like all the others who go from zero to sixshooter as soon as the opportunity presents itself.

I waited until their trucks disappeared around the corner and released the snake to the same place. I guess I’ll have to find another diamondback for my ‘research’.

The snake was massive, I’d estimate between 50-55″ based on its length compared to my 46″ hook. He did not deserve to be a belt; not today. 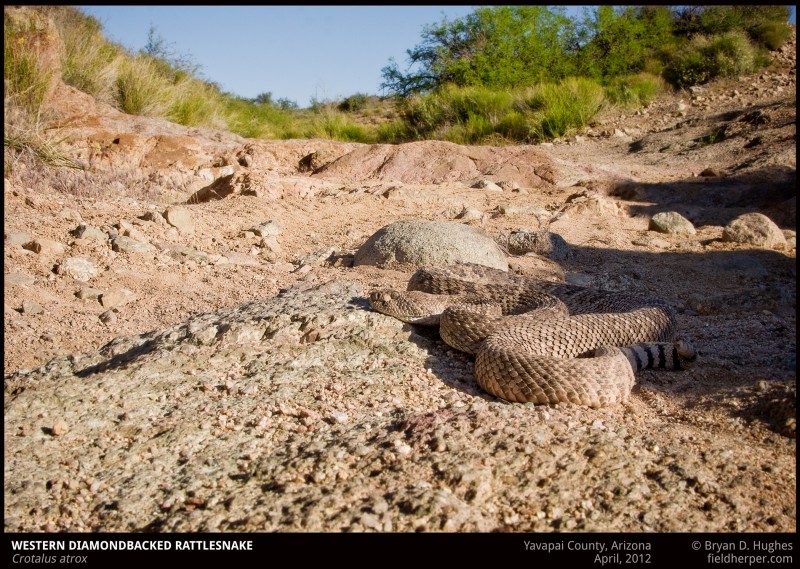 Also, tomorrow at this time I’ll be on a plane on my way back to PA for more timber rattlesnakes!

This entry was posted on Monday, May 7th, 2012 at 8:53 am and is filed under Behavior, Field Herping, Personal, Snakes. You can follow any responses to this entry through the RSS 2.0 feed. You can leave a response, or trackback from your own site.

8 Responses to “Diamondbacks and Dumbasses”