We started out earlier than we should have, with the weather what it was … more for logistics than activity. It’s always better to be early than late, and we were definitely early. By the time we got our stuff together and climbed to the place where all the snakes would be, the fog and cloud cover was still hugging the mountain with no sign of lifting. After sitting around for at least an hour, we got to work anyway. It wasn’t long before Rich found 3 tiny baby rock rattlesnakes sitting out in the open. They were the first of a good number of this species found that day, and it’s always fun to find multiples.

Here are a couple – I’ll post others another day.

See him there? I could have gotten closer, but lately I’ve enjoyed taking shots like this – the snake in the environment it’s in, which better tells the tale. Photographers tend to gripe about it, the subject being so small, but that’s not really what this is all about. 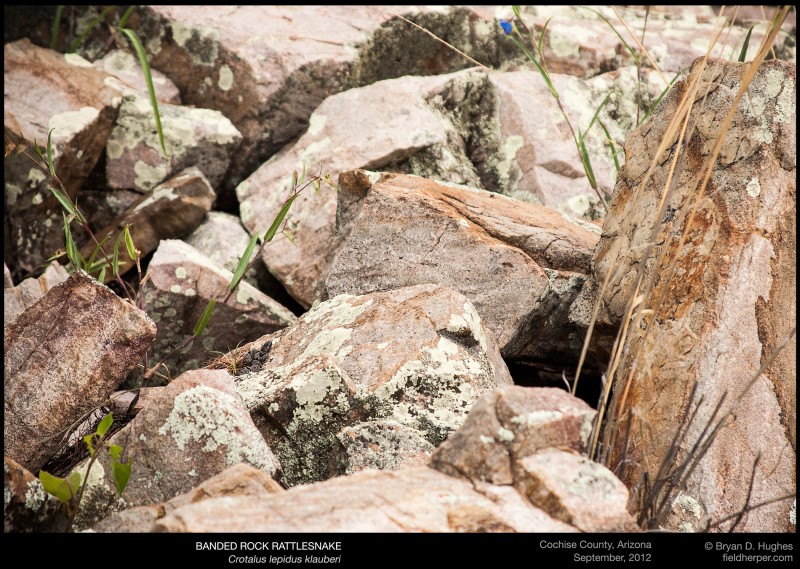 This one was showing off some caudal luring skills. If I were a lizard, I’d certainly think that yellow wiggler was breakfast.

This entry was posted on Wednesday, February 13th, 2013 at 8:34 am and is filed under Field Trips, Photography, Snakes. You can follow any responses to this entry through the RSS 2.0 feed. You can leave a response, or trackback from your own site.