Field notes and photography by Bryan D. Hughes
May
3rd
2015

Sandy Situations: Convergent Evolution for Life in the Desert

This post is part of #CrawliesConverge, a series of posts highlighting convergent evolution in reptiles and amphibians. More at RAMBIN, and on twitter.

In Arizona, we have a little desert rattlesnake that everyone has heard of, but not many people seem to know much about or have actually seen … or even know that we have them here. It’s the sidewinder (Crotalus cerastes), one of my favorite little rattlesnakes to find out here, and master of desert specialization.

They get the name in the same way that a lot of snakes get their names: bluntly labeled for something that they do. To move quickly over the hot sandy soil, they have evolved a particularly iconic behavior: sideways scooting over the sand by throwing a loop of their body forward, then pulling the rest alongside. This not only makes them the fastest rattlesnake1, but one that is able to move over hot ground that would otherwise kill it. They’re very common wherever they range, and are quite easy to find with just a little bit of effort – when you see one, it gives its identity away by the way it moves.

So, why do I hear at any education event where I’ve brought one to, “a sidewinder is a rattlesnake?! Wha!”? Everyone’s heard of a sidewinder, but a smaller portion of us know that they are a rattlesnake, or that they live here. They’re not at all misinformed. On the other side of the world, there is also a sidewinder that looks and acts very similar to our own little rattle-tailed variety.

It’s the Horned Viper (Cerastes cerastes), and it’s not even closely related to our sidewinder in the US. The split occurs up at the family level. Which means, as far as taxonomic categorization is concerned, they are as different as dogs and cats. They’re found in the middle east and parts of Northern Africa … a world away, so how similar could they possibly be? Here they are, side-by-side:

There’s more, too, than just movement. In pattern, these animals are remarkably similar.

There’s more, too. Above each eye is a scale that has adapted to be a horn. It’s not exactly known why these exist; their function has several theories attached. One of which is that they could be flexible, or otherwise protect the eyes from blowing sand2. Regardless of cause, both of these snakes have evolved a similar structure to solve what is most likely a similar solution. 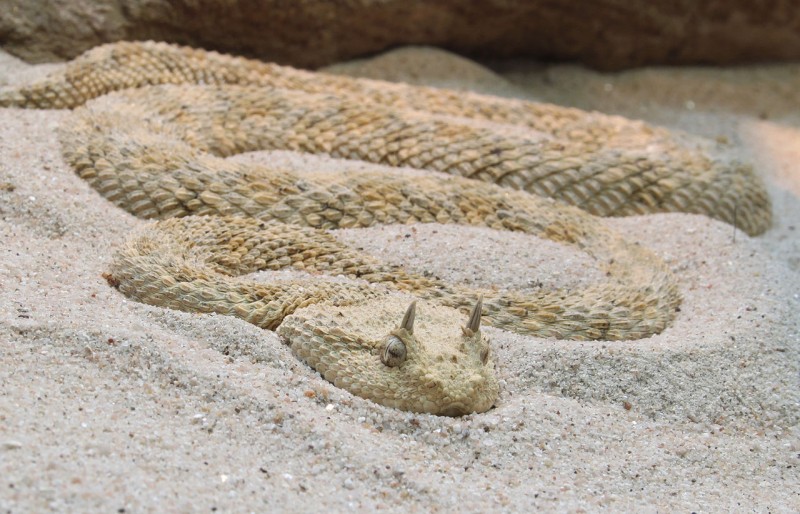 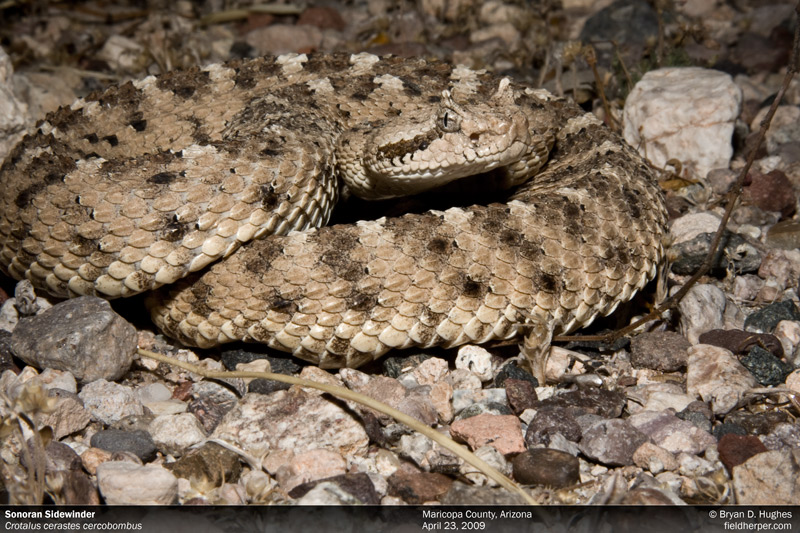 This similarity between animals on opposite ends of the Earth is one of my favorite, go-to examples of convergent evolution; perhaps because it comes up so often in day-to-day talking to people who are curious about snakes. Completely independently, they’ve found very similar solutions to common problems. If animal life on Earth were ‘rebooted’ and these snakes never existed, it’s extremely likely that snake-like animals would end up in similar places, where sand forces evolution to provide answers to life in challenging conditions. By procedure alone, the answer to how to live in the hot sand, if you’re a snake, is to look, act, and move like this.

Now, time to quit typing and get out to my favorite sidewinder-viewing spot before the sun sets! Check out the rest of the #CrawliesConverge posts on twitter.

This entry was posted on Sunday, May 3rd, 2015 at 8:00 am and is filed under Uncategorized. You can follow any responses to this entry through the RSS 2.0 feed. You can leave a response, or trackback from your own site.