I finally got out to check out some local dens that I follow, and scout for some new ones if it appears that it’s an active day. It’s been several years since I haven’t seen a rattlesnake in January and I had to give it a shot. I haven’t really even gotten out this year yet, due to our tiny baby daughter needing her dad around instead of shining lights into various desert holes.

Often, when I’m going to scout for new dens, I’ll check out a known site first, just to calibrate and manage expectation … if nobody is out at a known site, then I shouldn’t expect them to be out at a new place, either, so it stays on the “maybe” list. The first stop of the day produced no snake sightings, even though there are at least 20 Western Diamondbacks at this location … so, it’s going to be a slow day. Conditions are really bad, too. Not just because it’s January (you’d think this is enough), but the huge swing in temperatures. Last night at this site it was near freezing at sunup, and the rock temperature measured at >120F by noon with bright sun and moderate wind. That means that under the rocks, it’s lethally cold, and on top of the same rock, it’s lethally hot. There’s not a lot that a rattlesnake can do with that, and no incentive to burn internal moisture by sitting around on the surface.

Still, the first snake of the day was a large Western Diamondback sitting in partial cover at a new densite. This wasn’t even on my list of scouts for the day, it’s just an outcrop that I drove by and thought it’s worth a 20 minute hike to check out. I can’t wait to return in a few weeks at the height of activity. No photos of this snake, it went down quickly and I do not want to disturb any snake at a den.

I eventually went to the largest known site that I visit and, as expected, about everyone was hidden. One of the two primary den entrances had a Western Diamondback sitting outside, and shining the surrounding cracks showed a few more tucked away. At the Blacktailed Rattlesnake den that’s about 100′ above the Diamondbacks, a single Blacktail was sitting out on the cold side. Unfortunately he saw me first and cinched up from his fully outstretched position, but thankfully he stayed that way long enough for me to get a couple of shots. 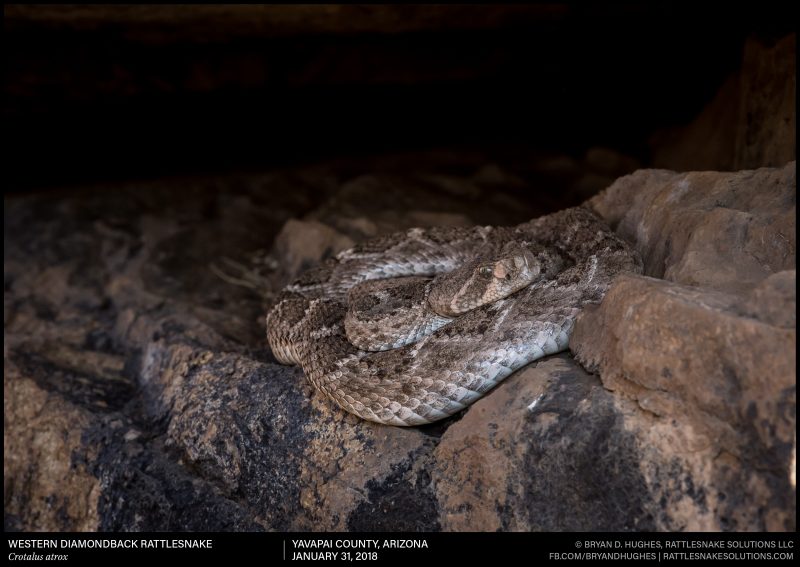 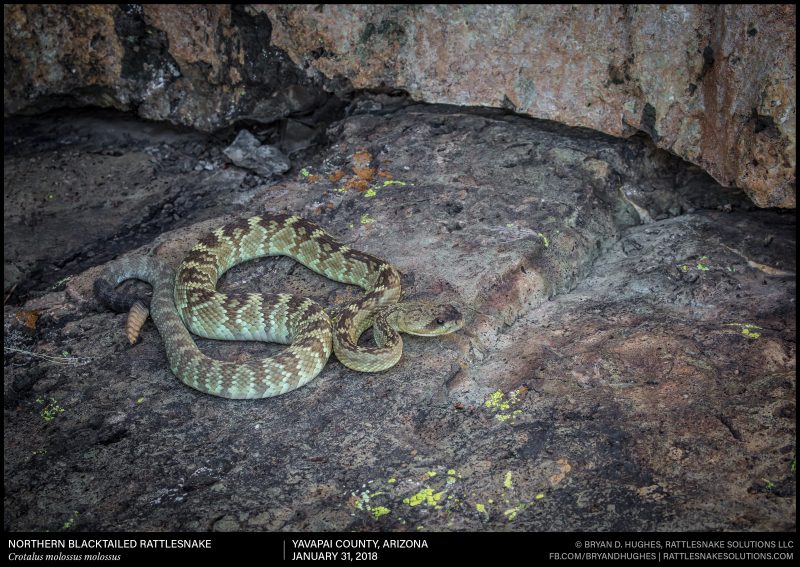 This entry was posted on Thursday, February 1st, 2018 at 10:16 am and is filed under Field Herping. You can follow any responses to this entry through the RSS 2.0 feed. You can leave a response, or trackback from your own site.