Sonoran Coralsnake: The Only One I Saw in 2010

Cruising around with a few friends in August, we lucked out. We had two vehicles making passes on a stretch of road looking for rattlesnakes, and on the way back I saw that the other car had stopped and they were photographing something. Turns out they had caught a nightsnake and were setting it up for some shots, and I wanted some too … so I pulled a U-turn to park and “HOLY SHIT A CORALSNAKE”! A few frantic seconds later and we caught him.

Closer, you can see those tiny venom glands slightly swelling behind the eyes. It takes an act of extreme stupidity to actually get envenomated by these guys, who tend to fart as a primary defensive move. The Chihuahuan Hooknosed Snake will also fart in defense, and I have to say that their performance is more impressive than these little corals. The ‘cloacal popping’, as it is more nicely put, sounds like little armpit farts in the hooknosed snake, while the coral sounds more like someone walking across a freshly waxed floor in rubber shoes.

These are one of the very few Elapid species found in the United States. The Elapidae family is better known for its inclusion of Cobras, Sea Snakes, and Mambas, with whom these little coralsnakes have neurtoxic venom in common.

Anyone that’s tried to catch one of these, too, knows just how disorienting the pattern can be. They seem to move in an exaggerated S-pattern when trying to escape and will more or less disappear in front of your eyes, like a color wheel given a spin. 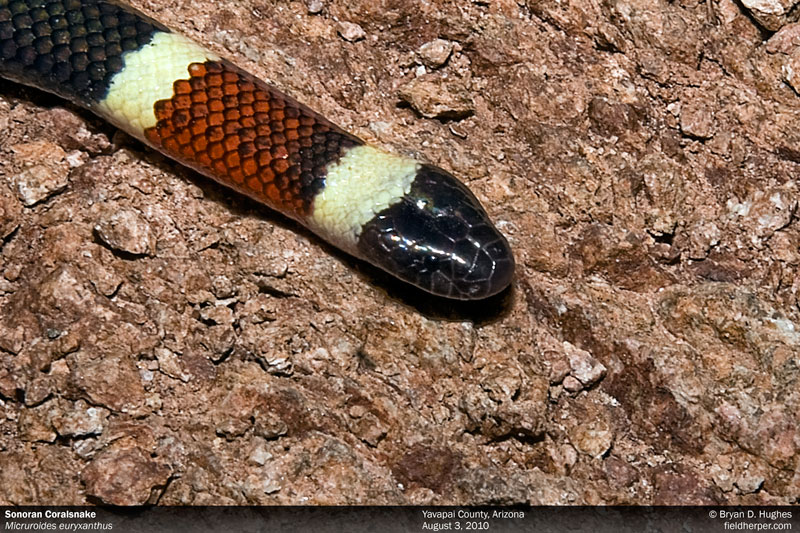 This entry was posted on Monday, March 7th, 2011 at 10:05 am and is filed under Field Herping, Photography, Research. You can follow any responses to this entry through the RSS 2.0 feed. You can leave a response, or trackback from your own site.