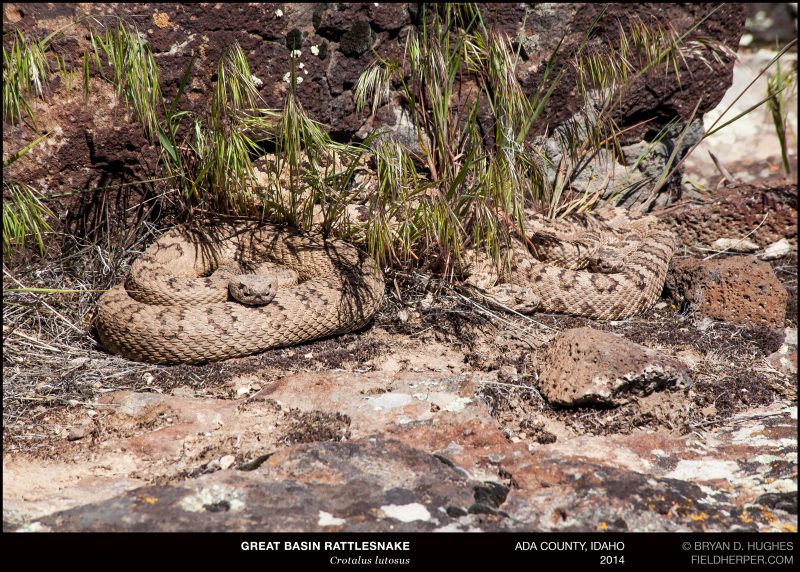 Found about an hour after leaving the Jacksonville airport. I know they are common, but coming from the West, I am so happy to see these!

We found this solo diamondback coming out of a crack near where a Blacktailed rattlesnake was also found denning … though further away than expected. Interestingly, even though it is in still in the low valley technically, the edge of where dens are North-facing (or otherwise indiscriminate in aspect in relation to the winter sun) seems to be right in this area, around 2,400′ in elevation. 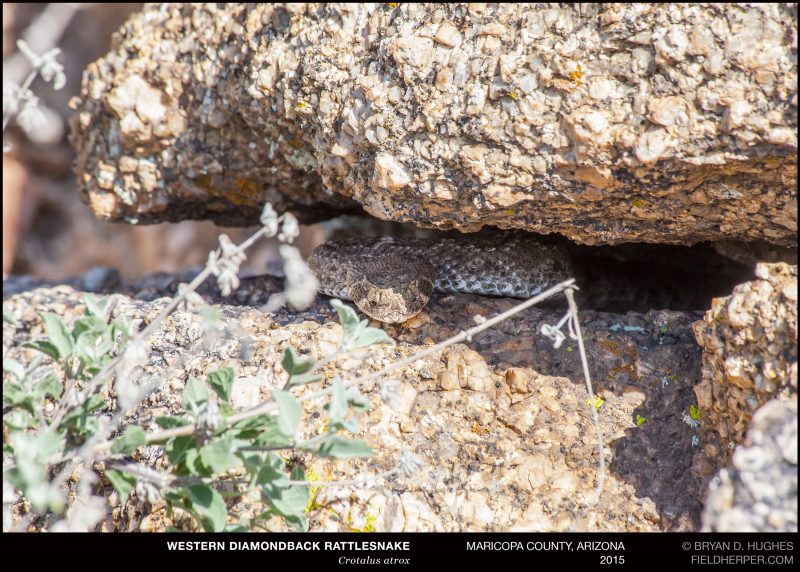 We found this guy under some debris. By “debris”, I mean huge disgusting piles of trash left there by herds of rednecks. At least someone likes it. 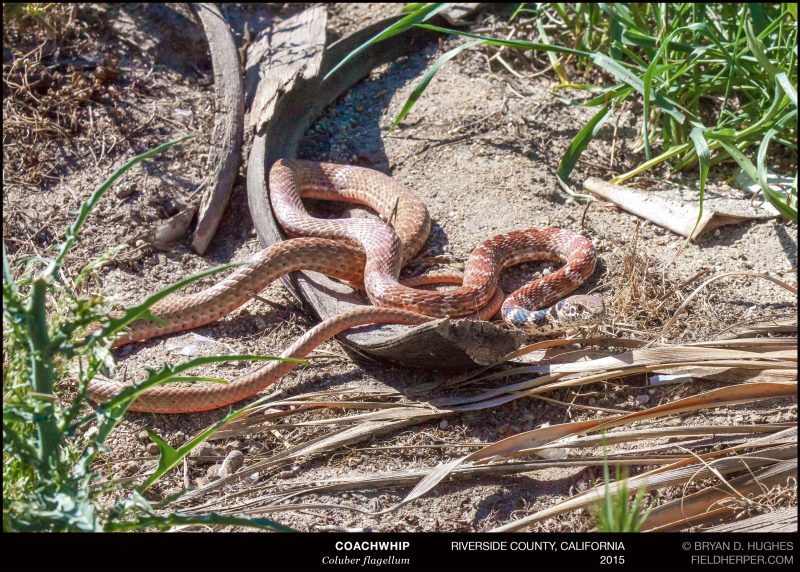 On my second trip to Florida in 2016, I planned on spending the entire time in the Everglades area … but hurricane Matthew had other plans, and I had to retreat to the panhandle area for most of the trip. Not to complain, however, as these little guys were all over: dusky pygmy rattlesnake. 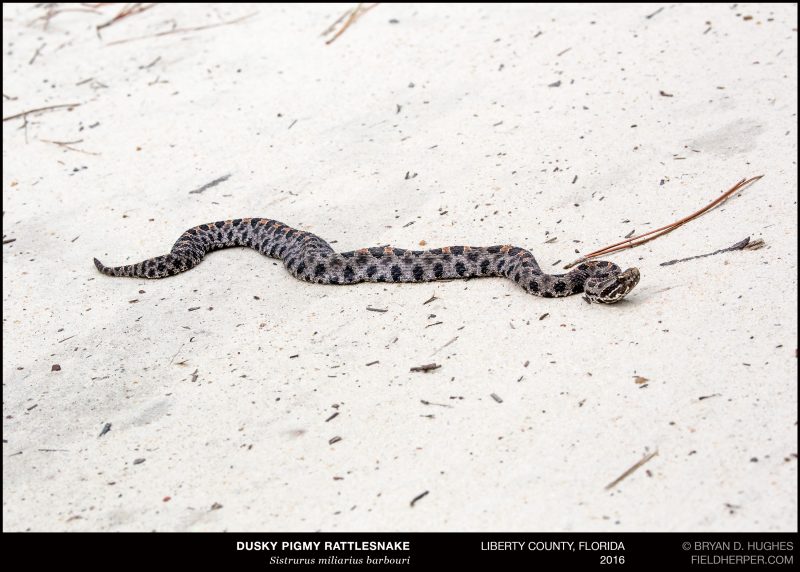 Sometimes I like photos that aren’t exactly clear, but tell the story a bit better than the typical field-guide shot. This Red Diamond Rattlesnake was peeking out from rock cover when I got this shot, and was able to follow him around awhile after. 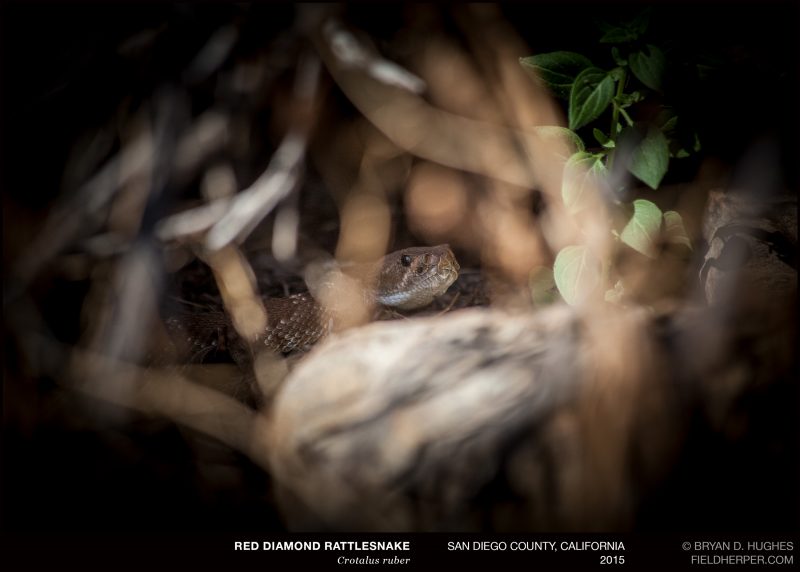 I saw this lutosus eating a prairie dog in 2013. The following year, I went back to exactly the same spot, and there she was again, eating another one! Pretty good hunting spot, I’d say, for the both of us.

It’s interesting how, I suppose wasteful, these staging Great Basins are in this particular area. There are dead rodents everywhere; envenomated and apparently never found by the snake that bit them. They are so numerous, in fact, that I have begun to use a sudden abundance of dead rodents as an indicator of a densite … extending my search window well into times of the year when the snakes have long since vanished for the year. The last time I went to this area, I found 2 new satellite dens this way, in the afternoon when it had gotten too hot for snakes to be on the surface. I searched the area for dead rodents, then returned at a later time and found new snakes that I had not seen at this complex. 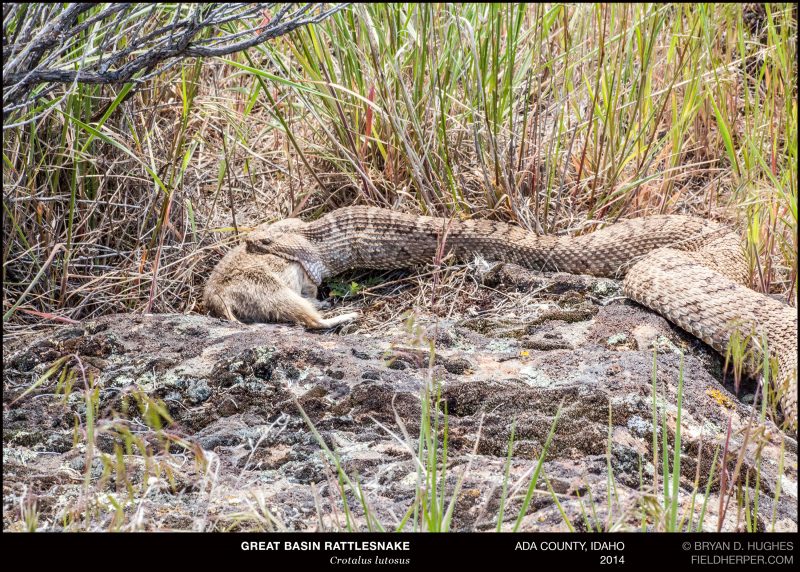 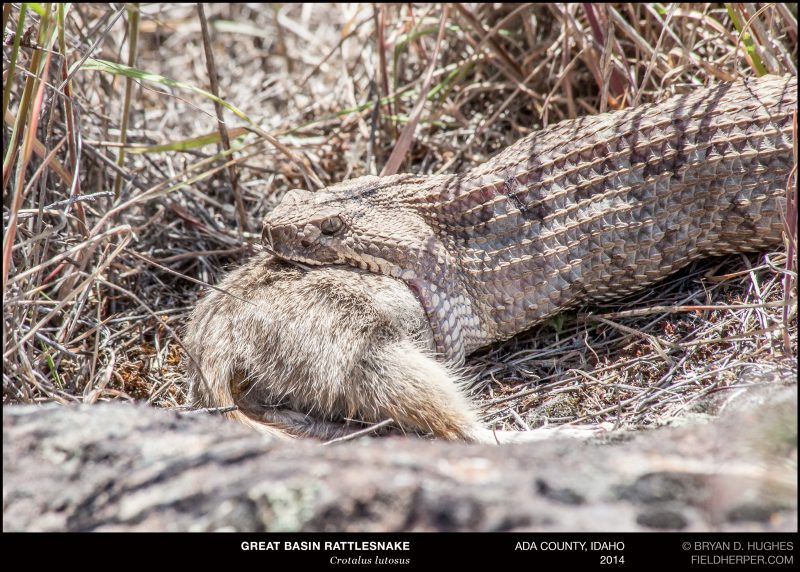 Per maybe 20 Great Basin Rattlesnakes that I see at dens in Eastern Idaho, there’s a gophersnake cruising around. They’re higher contrast and in some ways prettier than our Sonoran variety in Arizona … but I still like them 🙂 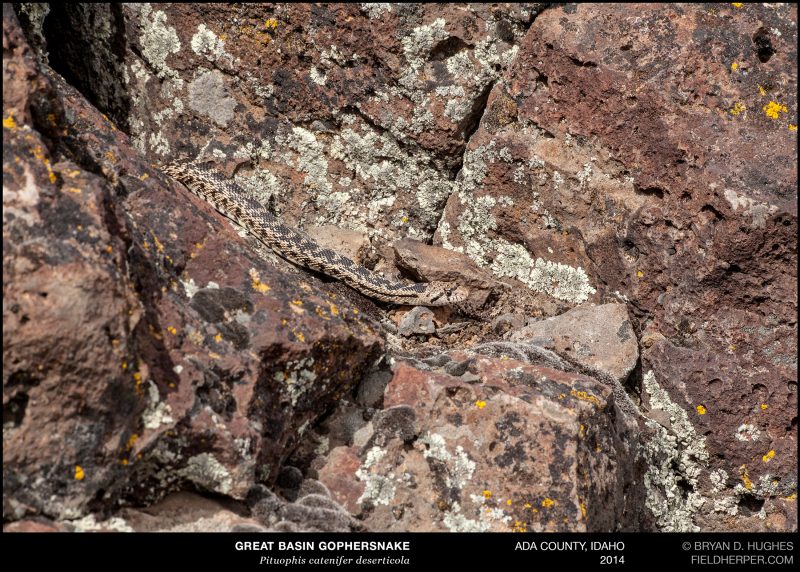 Here are 3 Red Diamond Rattlesnakes (Crotalus ruber) from the Southern end of California. They look similar in many ways to Western Diamondback Rattlesnakes, but the more time you spend with them, the more differences show up. Aside from the usually bright red or orange color, their attitude is quite different. They’re considered to be the most calm of all rattlesnake species, and in my experience this has certainly been the case. This may partially be due to their tendency to hiss, rather than rattle, as a defensive display. Just as I’ve been alerted to snakes that I failed to see by them rattling at me, I’ve found quite a few red diamonds by their loud, rasping hiss. Of course the goal is to keep any stressful interaction to a minimum, but when we’re visiting dens and seeing dozens in a weekend, it happens from time to time. Sadly, many of these den sites are torn to shreds by boa hunters, and seem to be degrading very fast. 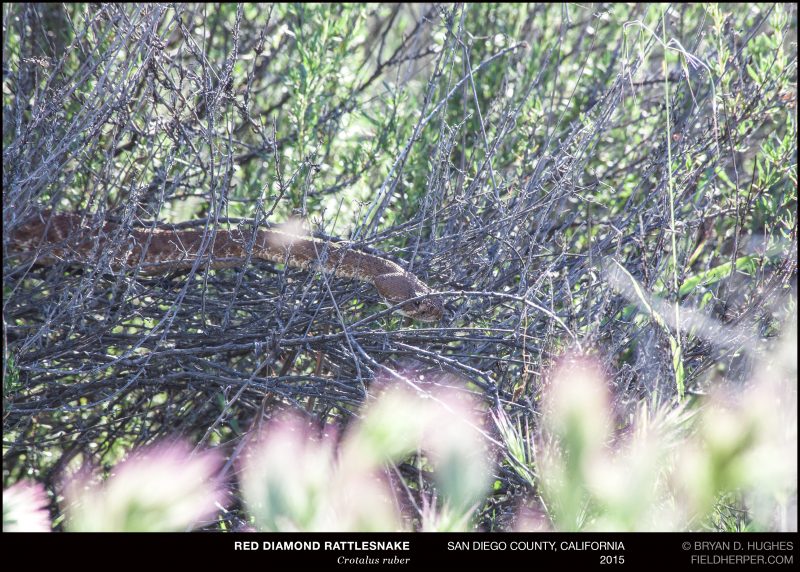 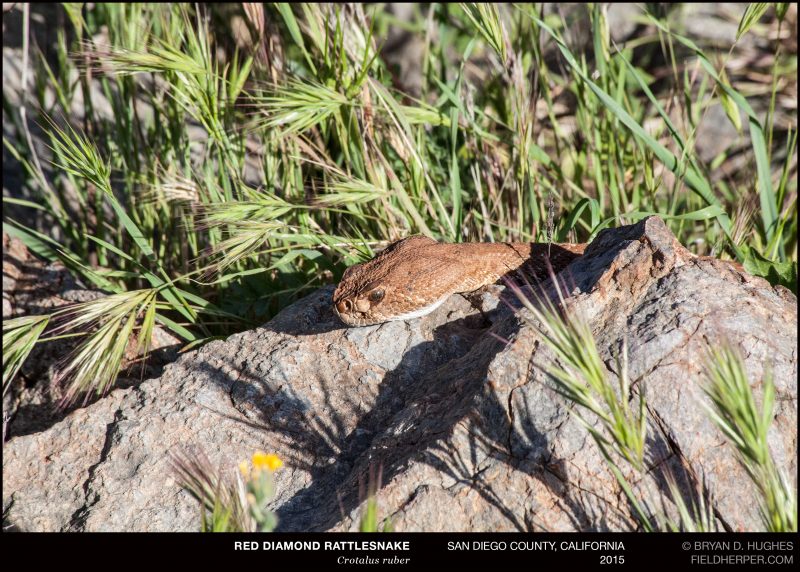 Eastern Gartersnake in the underbrush

One of the snakes we found quite often while looking for timber rattlesnakes in Pennsylvania were these Eastern Gartersnakes. They’re unusually stocky and short, relative to the garter species in the West. I had a lot of fun finding them, and learned their musk is pretty awful stuff. Maybe it’s just different than what I’m used to growing up in Oregon … I smelled terrible most of the trip because of it. 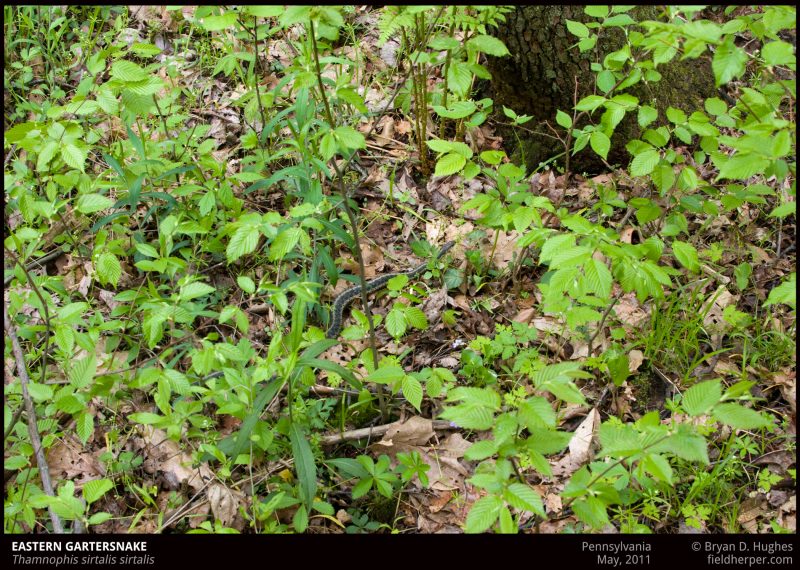 This guy was a bonus snake on a return trip from San Diego. We were having one of those “we can do no wrong” trips, where we seemed to have just the best of luck anywhere we went. We stopped for gas just over the Arizona border and decided to take a single pass on a busted up road that lead past the gas station, and within several hundred yards we were looking at a lyresnake “freebie”. These snakes are so cool! 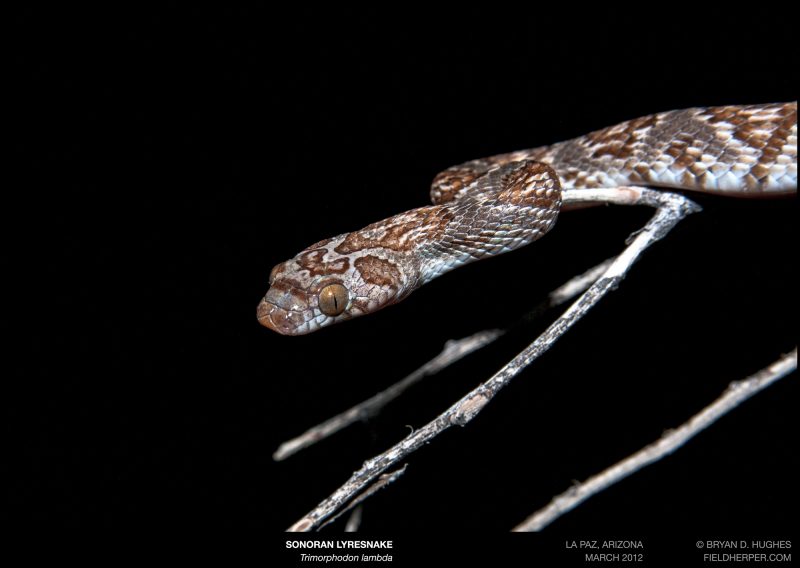 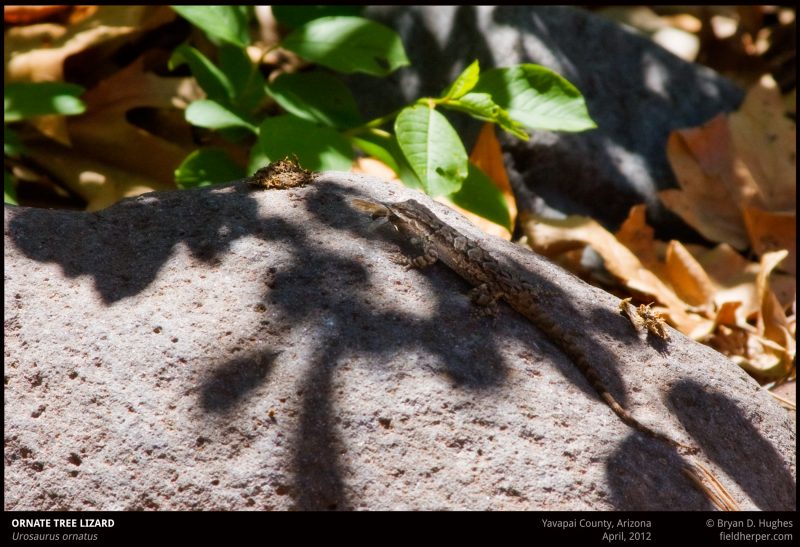 Posted in Lizards | No Comments »